Skip to content
The research team of the Graduate School of Engineering at the University of Tokyo and the director of the Nanophotonics Research Center, Otsuka Yoshi, continued to make SiC and GaP shine again after the high-efficiency luminescence of silicon in 2011. These semiconductors all have an indirect migration type band structure. That is to say, when the electrons of the conduction band migrate to the valence band, since the momentum conservation is generally not realized, it is impossible to migrate. Therefore, the industry has always considered these semiconductors "not suitable for manufacturing light-emitting elements."

The reason why the indirect migration semiconductor can emit light is that the "dressed photon" developed by the Otsu Research Laboratory has set up a "migratory bridge" for the energy band structure that could not be previously migrated. 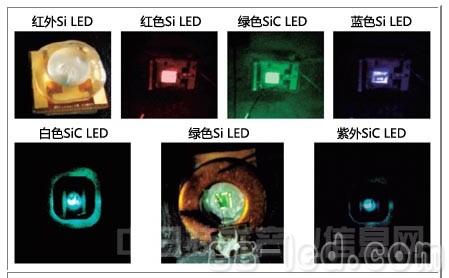 Figure 1 Si and SiC LEDs can be freely illuminated by infrared, visible, and ultraviolet light.

A Dressed photon is a photon that is attached to a nanoparticle like a "cloth" when the photons are combined with the electrons of the nanoparticle when the light is irradiated to the fine particles (nanoparticles). Otsu pointed out that photons combined with electrons on the surface of matter also have "surface plasmons", but "the difference between the two is that the frequency of the surface plasmons is constant, and the frequency of the Dressed photons is not fixed." Dajin explained that the reason is that the nanoparticles are very small, so the effect of the uncertainty principle is obvious. Moreover, until recently, Otsu had called it "near-field light," but "found during the research, it is more appropriate to call it a Dressed photon."

The method of making a luminescent silicon LED "Dressed photon reference annealing method" is as follows (Fig. 3). When a p-layer of a silicon LED was produced, a current was applied to the silicon doped with boron (B), and annealed at 300 Â° C for 10 minutes using Joule heat. At this point, the light is also illuminated from outside the component. Thus, the boron particles irradiated with the light form a phonon level and undergo a stimulated emission phenomenon, and emit light by using substantially the same wavelength as the irradiated light. After fabrication, the LED can emit light by injecting current without illuminating the light. 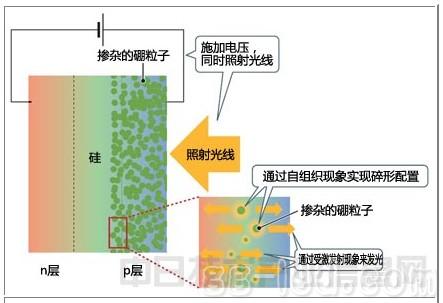 Phenomenon of light-emitting silicon LED. When a p-type silicon layer is formed by doping boron particles, light is irradiated to a desired wavelength while passing current. At this time, the boron particles are self-organized, and they can form a suitable intermediate belt and emit light by stimulated emission. It is then illuminated by injecting current.

The focus here is on light. If the light is not illuminated, the stimulated emission will not occur and the LED will not emit light. Chuan Tianzhong, a special associate professor who led the research in the Otsu Research Laboratory, pointed out that the distribution of boron can also â€œspontaneously become shattered under the illumination of light (the same pattern or shape will appear when the details of a particular pattern or shape are enlarged). In addition, the wavelength of the light can be changed by selecting the illumination light. The wavelength longer than the band gap and the wavelength shorter than the band gap can be used. When the illumination light is turned white, an LED emitting white light can be produced.

These semiconductors are used in a wide range of applications. One of them is the "silicon photon" that can only use silicon to achieve light transmission. Previous examples of Dressed photonics applications, examples of applications in the near future, and future application examples. For example, this silicon LED can also directly become a high-efficiency solar cell that can generate electricity by using light having a longer or shorter wavelength than the band gap. The Otsu Research Office has started to verify this aspect and has confirmed that the conversion efficiency of solar cells can be increased by about two percentage points. Moreover, it is also expected to realize an inorganic material display that emits light like an organic EL.

Pigtails & patch cords can be supplied in a variety of lengths, colors and with a variety of different connector types. Different fiber types and cable diameters are also available on request.