In May 2013, scientists in the field of bioelectronics published an update on Advanced Materials on dissolvable wireless control energy storage circuits-the theme is that micro devices automatically dissolve after completing the treatment task. At present, this technology has been carried out in mice In the experimental stage, possible future applications include stimulating nerve and bone growth, assisting wound healing, and delivering drugs and antibiotics.

Try to imagine that after a very tiny wireless circuit enters the human body, it reaches its destination through external control, and begins to release heat to destroy the surrounding bacteria. Such "thermotherapy" may be to deal with resistant bacteria The best way is that after completing the sterilization mission, this micro device will dissolve itself and expel it through the human body's circulation mechanism. John Rogers, a mechanical engineer at the University of Illinois, said that these micro-devices are often only responsible for one phase of the task, so after the task is completed, it is best to dissolve on its own. 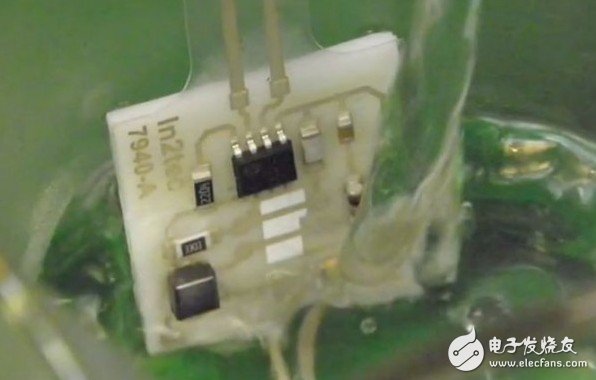 In 2012, John Rogers published the research results of water-soluble silicon material circuits; in 2013, he and his team developed a miniature LED implantable in the brain. The latest achievement is that the wireless control circuit is fixed on an ultra-thin silk substrate, which can respond to different frequency signals. Capacitors, inductors and resistive components are made of water-soluble biological materials, and the nano silicon film is used as Semiconductor; then magnesium, silicon dioxide or magnesium oxide as the insulating part.

The antenna that plays an important role in the entire wireless control circuit is made of magnesium embedded on the surface of the silk. Its function is to receive wireless signals and convert it into electrical energy to drive the circuit. In order to verify the operation of the circuit, John and his colleagues combined the magnesium antenna with the micro circuit of the device LED and set up the wireless transmitter at a distance of 6 feet. The micro device successfully succeeded in 15% of the wireless signal energy Converted to electricity, the LED light flashes, and then the circuit is placed in deionized water, and it is successfully dissolved.

After experiments, a 500-nanometer, very delicate magnesium antenna completely dissolved in deionized water at room temperature in 2 hours; if it is a magnesium antenna that is six times larger than this, it only takes a few days to dissolve . John Rogers' work team used an infrared camera to observe whether the micro device implanted in the subcutaneous tissue is functioning properly; it has also been observed that the skin around the operating environment will slightly increase by a few degrees Celsius, but the current experimental stage has not been found to cause inflammation, Fibrosis or other side effects.

Professor Christopher BetTInger of Carnegie Mellon University mentioned that electronic systems that dissolve in the body will have important significance for medical treatment, and the use of radio waves as a source of energy means that the deeper the device is, the larger the antenna size required The bigger it is. He believes that the supply of energy will be the main problem faced by biologically dissolved electrons. In addition, the academic community also needs to clearly define which diseases such tools can exert a greater advantage than traditional therapies.